Dangers of Amalgam Fillings and Why They Should be Replaced 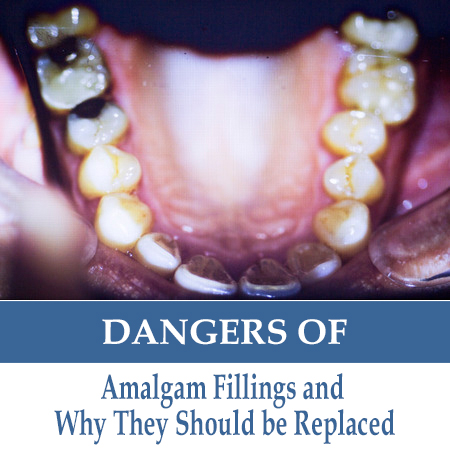 Amalgam has been a popular choice for dental fillings for decades thanks to its durability and affordability. However, in recent years, concern has grown about the safety of this tooth filling material, especially because of the possibility of mercury vapors. Some dental patients have started asking their dentists to remove their amalgam fillings and replace them with composite fillings. Understanding the potential risks of an amalgam filling can help you work with your dentist to decide if a full replacement of amalgam fillings is right for you.

What is an Amalgam Filling?
Amalgam is a filling material put together from a combination of several metals to repair cavities in your teeth. The metals used include mercury, silver, copper, tin and zinc. Mercury in particular is used due to how well it bonds with other metals and its ability to harden quickly after the dentist places the filling in your tooth.  In the last few years, some patients and professionals have expressed concern about the mercury content in these fillings due to the known dangers of mercury.

The Dangers of Amalgam
Mercury is an element found naturally in the world, and humans have been utilizing mercury in a variety of settings since antiquity. However, exposure to high levels of mercury can have a severe adverse effect on humans, such as fatal damage to the lungs when breathed into the body. Children are more susceptible to the damage caused by mercury and can suffer damage to their brains and other developing systems. Although mercury is not used as much as it was years ago, it still persists in some health settings, including dental fillings. Recent research indicates that mercury vapor can be released by silver fillings, especially when the filling wears down. With the known dangers of mercury in mind, it’s no surprise that patients may have concerns about their amalgam fillings.

Should You Replace Your Mercury Fillings?
Replacing all the fillings in your mouth may be a good choice if you are concerned about your body’s absorption of mercury vapors. However, the process for removing these fillings may expose you to higher levels of mercury than leaving them in your mouth. Talking to your dentist and completing a thorough examination of your amalgam fillings can help you make the best choice for your oral health. If your fillings are starting to wear down and will need replacement to ensure your teeth’s stability, switching to composite fillings can ease your concerns about mercury. Composite fillings are also an excellent choice if the appearance of your silver fillings bothers you; the material used in resin fillings can be altered to blend in with the natural shade of your teeth.

If you have mercury fillings and want to learn more about your options for replacing them, contact Wekiva Dental today. For over thirty years, our office has been helping Orlando dental patients protect their smiles and their oral health.